Guide: What is Space Flown Memorabilia? | The Space Collective

WHAT IS SPACE FLOWN MEMORABILIA?

Space flown memorabilia is an object, commonly referred to as an artifact, which has literally been in space. The artifact in question may be an internal or even external part of the actual spacecraft, such as heatshield or thermal insulation. These spacecraft parts protect vital spacecraft systems from the extreme environment of space or reentry into Earth's atmosphere and are sometimes removed post-flight for testing or replacement.

Space flown memorabilia could also be something carried aboard the spacecraft, such as a tool or checklist. As you would expect, there are numerous tools and checklists for all manner of different outer space activities, some of which ultimately return to Earth after the missions. One example would be the flashlight pictured, which was used by astronaut Rusty Schweickart during his Apollo 9 mission. Another fun example of a tool used in space is cutlery. Sure, cutlery may not be the first thing that comes to mind when you think of a tool used in space, but without it, astronauts would be eating with their claw-like hands. Have you ever tried to eat apple sauce with your hands? Now try doing that in micro-gravity and see how fun it is! Anyway, moving on.

Lastly, space flown memorabilia can even take the form of awards. It was common throughout NASA missions for the crews to carry bundles of artifacts intended to be given as gifts or awards to ground crew as a thank you for their hard work and dedication. These were often pins, patches, and flags, to name but a few. 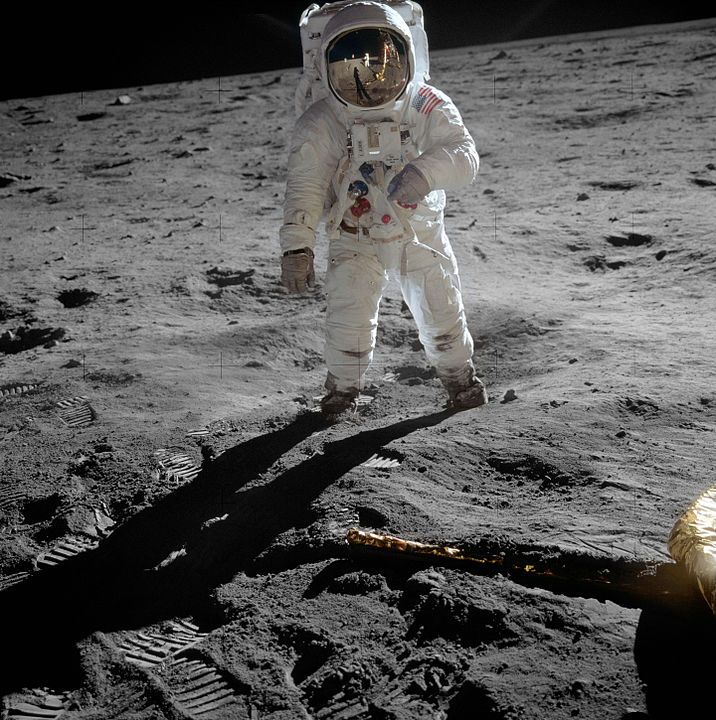 The reason is different for each person. There are those of us whom are fascinated with spaceflight and would give anything to be a part of it. Or at least own a part of it. By collecting space flown memorabilia, you can do just that. You can literally own something that has been in space! Except for a fortunate few, this is the closest many of us have come to space. There is no denying that to own something flown in space is incredible and understandably comes as a surprise to many people.

There is also another significant reason why people collect space flown memorabilia: investment. Over the past few decades, the collectors market for space flown memorabilia has exploded with demand being driven by the advancement in spaceflight in recent years, as well as the desire to nostalgically celebrate the past spaceflight achievements such as humanity's first steps on the moon. Then, of course, there is also media, movies, and television series in which we, the viewers, are either taken back in time to see where we were or forward into the future to see where we could be. Who wouldn't want to be a part of that?

In all, we each collect for different reasons. Whether it is a love of spaceflight, nostalgia, investment, or all of the above, collecting space flown memorabilia has never been more exciting!

This is where research and knowledge are of the utmost importance, and naturally is something we take incredibly seriously at The Space Collective.

It is essential to understand that when collecting space flown memorabilia, the authenticity of artifacts can vary significantly. An example of this is NASA's Mercury Program. As any spaceflight history buff will tell you, this was NASA's first human spaceflight program and was the American response to the Soviet Union's advancement in spaceflight. But what many do not know is that the artifacts that came from Mercury are much more difficult to authenticate than, say the Shuttle Program.

The reason for this is frustratingly simple: a lack of record-keeping. Authenticity is primarily about the paper trail, what is known, written and documented. In the early days of Mercury, the focus was understandably on beating the Soviets to space, as opposed to keeping records. Although to the credit of NASA employees and contractors at the time, they did keep some documentation. It is also worth noting that back in the days of Mercury, and even Gemini and Apollo, nobody knew that many of these artifacts would one day be worth money and so didn't pay any particular attention to keeping records. If they did, little attention was paid to the wording of them. But fortunately, for the Space Shuttle memorabilia collectors out there, by the time the program was up and running, people began to understand that there was a market for these artifacts and that documentation was essential in achieving the highest prices.

In summary, it is still possible to authenticate memorabilia right back through the Apollo, Gemini, and Mercury Programs, but it requires knowledge, patience, and research.

How to value space flown memorabilia

While there is no robust method to valuing space flown memorabilia, there are a few general observations that help.

The first thing to understand is that the space program and its achievements play a significant role in value. Generally speaking, space flown memorabilia from Apollo achieves higher prices than any other NASA program. The reason for this is due to the fact that the Apollo Program led to one of the most significant achievements in human history, landing a man on the moon. While Mercury may have been the first American manned spaceflight program, and Gemini pathed the way to the moon, it was Apollo that achieved the goal John F. Kennedy set for the United States on May 25, 1961.

To give you with a rudimentary understanding of how value generally works, here is a hierarchy of NASA program value in descending order:

This isn't a rule, of course, nor should it be taken as such. It is a generalization. There are numerous other aspects of space flown memorabilia that determine value. So let's move on to some of those.

This can be taken one of two ways; the distance traveled from Earth, or the total distance traveled during the mission. The former is used for the early NASA programs such as Mercury, Gemini, and Apollo. In contrast, the latter is used more for the Space Shuttle Program and modern-day programs such as the SpaceX and Grumman International Space Station resupply missions. The reason for this is quite simple; the program objectives were vastly different.

The objective of the early NASA programs was to reach the moon, so the destination was the primary factor. In contrast, the Space Shuttle and modern-day programs are more focused on ensuring that humans can spend prolonged periods in space. Therefore it stands to reason that the distance traveled from Earth would be the primary factor in determining the value of early space flown memorabilia. While in contrast, Shuttle and modern SpaceX and Grumman space flown memorabilia value is determined by the total distance traveled.

For Mercury, Gemini and Apollo flown memorabilia, the distance vs. value hierarchy looks something like this:

As you might expect, something used on the surface of the moon would generally be of far higher value than something flown or used in Earth orbit. You will also notice the emphasis on the two EVA used factors in the hierarchy; this is because an artifact used during an EVA (extravehicular activity) is generally valued higher than an artifact stowed within the spacecraft. The exposure of the artifact to deep space is fundamental in value as well as awesomeness.

An artifact used during an EVA by an astronaut will generally achieve a higher value than an object stored or used within the International Space Station. Again, the exposure to deep space is a highly desired trait amongst space flown memorabilia collectors. In respect to the mission duration, an object flown in space for 12 months will be valued higher than the same object, which has been flown in space for six months.

The historical significance of the artifact in question naturally plays a crucial role in determining the value. So let's find out why:

A. Mission
Apollo 11 and Apollo 13 are two of the most famous spaceflight missions in history, and as such, any space flown memorabilia associated with either mission generally command the highest value. This is due to the significance of their achievements and how well known they are in the public domain. After all, public awareness generally equals public demand. A good example of this is the Apollo 13 movie, which played a large part in making the mission more famous than it already was.

So when we compare Apollo 13 flown memorabilia to a less well-known mission such as Gemini 7 flown memorabilia, Apollo 13 will generally beat it out in value out more often than not. That isn't to detract from the significance of Gemini 7 or any other mission. For they each played their role in history, but this is how it usually works out.
B. Was it used? And if so, how?
Was the artifact something that contributed to the mission? A checklist perhaps, and if so, was it used? You will notice that generally speaking, a checklist which has been annotated and used during the mission will command a higher price than one which was never used, such as an emergency procedure checklist. If there was no emergency, it wasn't needed and so stayed neatly stored away.

i.e., The Apollo 11 LM Timeline Checklist will command a higher price than an Apollo 11 CSM G&C Checklist because the former was used, and the latter was not.

C. The Astronaut
We all have a favorite astronaut for whom we will pay more. In my case, it is Ed White; yours may be John Young or Neil Armstrong, and so on. Neil Armstrong was the first man to set foot upon the moon, an achievement which will see his name etched into the history books for a thousand years. It is this level of public awareness that aids in the value of the Armstrong name, so much so that even young children can answer the question "who was the first person to walk on the moon?". This single achievement makes any space flown memorabilia associated with him more valuable than any of his counterparts. Again, that isn't to say that any of the other astronauts are any less impressive. In fact, anyone who has met one knows that isn't true, but it is the fame attached to his name, which makes the difference.

This guide should be taken as a guideline, not a rule. It is intended to give you a general understanding of what space flown memorabilia is, how it is authenticated and valued.

You may have noticed there was no reference to Russian space flown memorabilia throughout this blog post. This is because Russian flown memorabilia has its own set of guidelines and factors, and so we will leave this for another day.

We hope you enjoyed this and now have a firm understanding of what space flown memorabilia is!