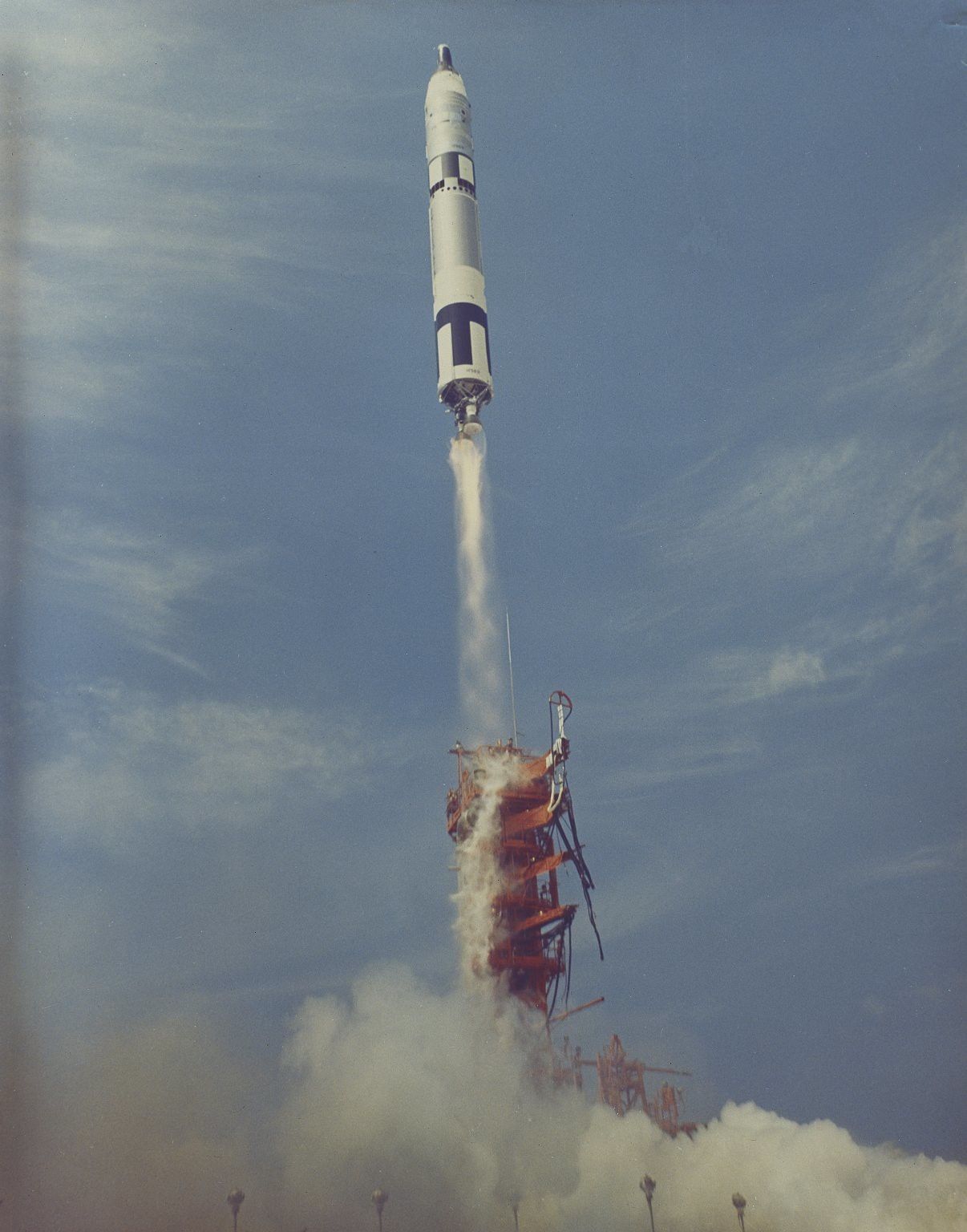 Gemini 8 was the sixth crewed spaceflight as part of NASA's Gemini program and the 12th crewed American spaceflight. Gemini 8 launched March 16, 1966, and saw the first docking of two spacecrafts in orbit. However, the mission suffered the first critical system failure of a U.S. spacecraft in space which threatened the astronauts' lives and required an immediate abort mission. The Gemini 8 crew was safely returned to Earth. The Gemini 8 crew consisted of Command pilot Neil Armstrong and Pilot David R. Scott. This flight marked the second time a U.S. civilian flew into space with Neil A. Armstrong and the first time a U.S. civilian flew into orbit.

Gemini 8 was scheduled as a three-day mission, wherein after launch, it was to rendezvous and dock with an Agena target vehicle on the fourth revolution. The Agena target vehicle had previously been launched into a circular orbit. This rendezvous was to be the first space docking in history, with four separate subsequent dockings planned. 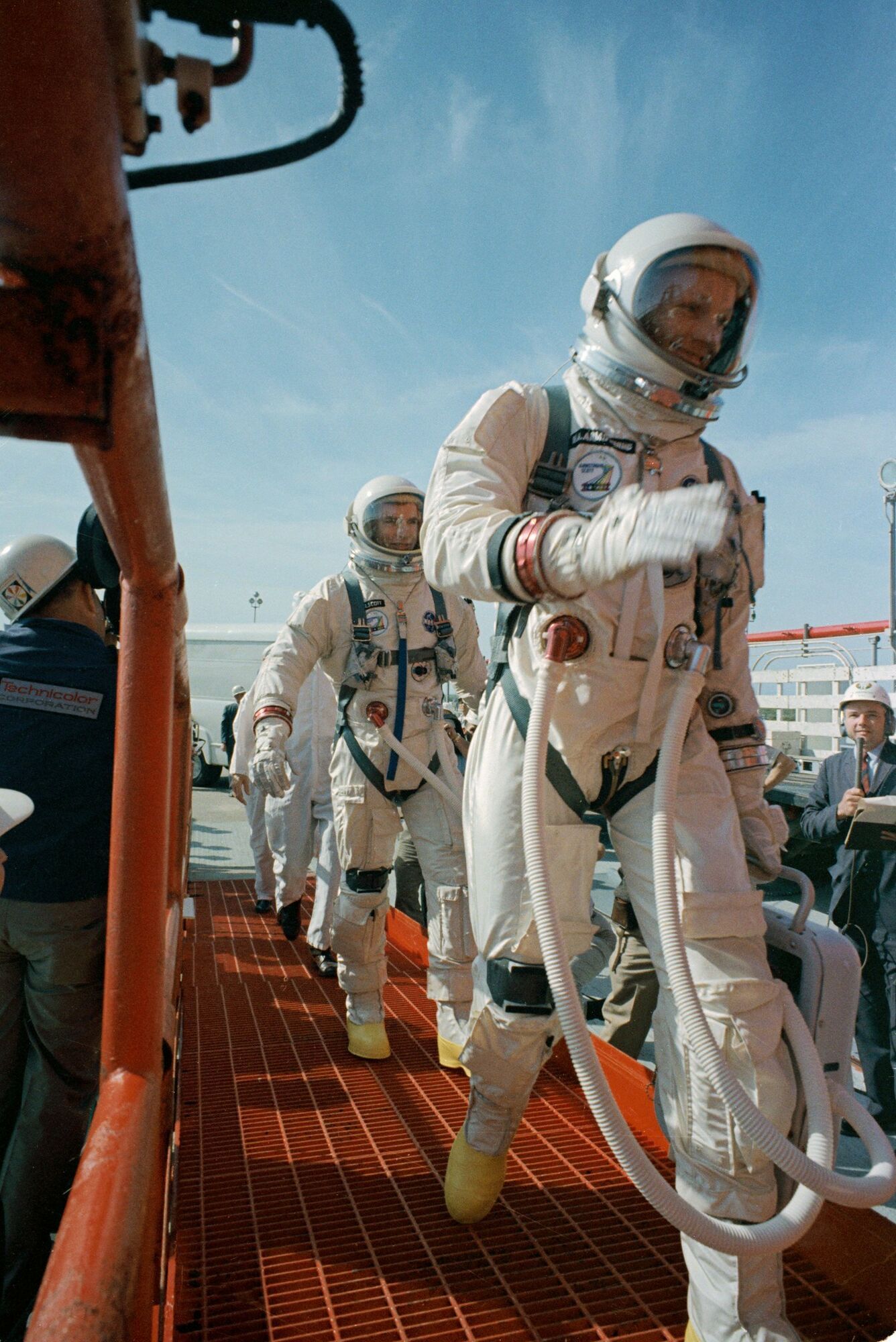 After the launch of Gemini 8, they spent nearly 4 hours adjusting their orbit in order to meet with the Agena. After 30 minutes of inspecting the Agena visually to ensure that the launch had not damaged it, Armstrong and Scott were given the green light for docking with the Agena. In a matter of minutes, the docking latches clicked, and a green light indicated that the docking was successful. There was some suspicion from ground control that the Agena's attitude control system was malfunctioning. However, this suspicion was found to be incorrect. Shortly before the radio blackout, Mission Control cautioned the astronauts to immediately abort the docking if any abnormalities occurred with the Agena.

Pilot David Scott, during the first docking, had planned to carry out an ambitious extra-vehicular activity (EVA) that would take over two hours and would have been the first EVA since the June 1965 spacewalk done by Ed White during Gemini IV. Scott, during his EVA, would have retrieved a nuclear emulsion radiation experiment from the front of the Gemini's spacecraft adapter on a 25-foot (7.6 m) tether, then activated a micrometeoroid experiment on the Agena. He then would have moved back to the Gemini and tested a minimum-reaction power tool. After Armstrong undocked from the Agena during the EVA, Scott was to wear and test an Extra-Vehicular Support Pack (ESP) that was stored at the back of the spacecraft adapter. The ESP was a backpack with a self-contained oxygen supply, a 75-foot (23 m) extension to his tether, and extra Freon propellant for his Hand-Held Maneuvering Unit. Scott would practice several maneuvers in formation with the Gemini and Agena vehicles, in concert with Armstrong in the Gemini. However, Scott would never perform this EVA due to the flight's abort due to an emergency that occurred shortly after docking.

After the Agena began executing the stored command program, which made the Agena turn the combined spacecrafts 90° to the right. However, the spacecrafts didn't stop at 90°, and Scott noticed that they were rolling. Gemini's Orbit Attitude and Maneuvering System (OAMS) thruster were used to control the roll, but it immediately started again after it stopped. During this time, Gemini 8 was out of range for ground communications.

Armstrong then reported that the OAMS fuel had dropped to 30%, indicating that the problem could be with Gemini 8 instead of the Agena. The crew decided they would have to undock from the Agena in order to analyze the situation after concerns were raised, seeing as the high rate of rotation could damage one or both spacecrafts or cause the propellant-heavy Agena to rupture or explode. Ground command took back control of the Agena while Armstrong struggled to stabilize the combined vehicle to undock. Once he could stabilize it enough, Scott hit the undock button, and Armstrong fired the thrusters to back away. Without the added weight of the Agena, the Gemini spacecraft started rolling again.

The astronauts then realized that the problem was on the Gemini; the tumble rate reached 296 degrees per second after separation. Armstrong then shut down the OAMS and used the Reentry Control System (RCS) thrusters, which are located on the spacecraft's nose, to stop the rolling. Scott later praised Armstrong's actions and said he was lucky to be flying with Armstrong. The spacecraft then came back in range of a ground communications ship Coastal Sentry Quebec. After the spacecraft was steadied, the crew tested each OAMS thruster individually and found that Number 8 was malfunctioning. They also found that nearly 75% of the reentry fuel supply had been used to stop the tumble. Once the RCS was fired during a flight for any reason, mission rules dictate that the flight must be aborted. The crew prepared for an emergency landing.

Gemini 8 was originally to land in the Atlantic, but that was supposed to be three days later and was no longer a viable option. A recovery ship, USS Leonard F. Mason, began steaming towards the new landing site 800 kilometers (500 mi) east of Okinawa. Reentry occurred out of range of NASA tracking stations over China. Planes were dispatched in addition to the recovery ship, and U.S. Air Force pilot Les Schneider saw the spacecraft descended precisely on time and on target. Three pararescuers were deployed and attached a flotation collar to the capsule.

Both the Gemini 8 crew and spacecraft were on board the recovery ship just three hours after splashdown. The astronauts were exhausted but were otherwise in good condition. However, the astronauts and pararescuers suffered from seasickness. The crew were briefly checked and slept for nine hours. The following day, the ship docked at Naha. NASA officials, and fellow astronaut Walter Schirra, flew into Naha to greet the Gemini 8 crew before the astronauts were called back for medical testing and a debrief. After their release, the astronauts were brought to waiting helicopters by limousine and began their journey back to NASA headquarters in Florida.

There was no conclusive reason found for the thruster malfunction during Gemini 8. It was determined to most probably be caused by an electrical short, most likely due to a static discharge. Even when it was switched off, power still flowed to the thruster. To prevent this problem from recurring, spacecraft designs were changed so each thruster would have an isolated circuit.