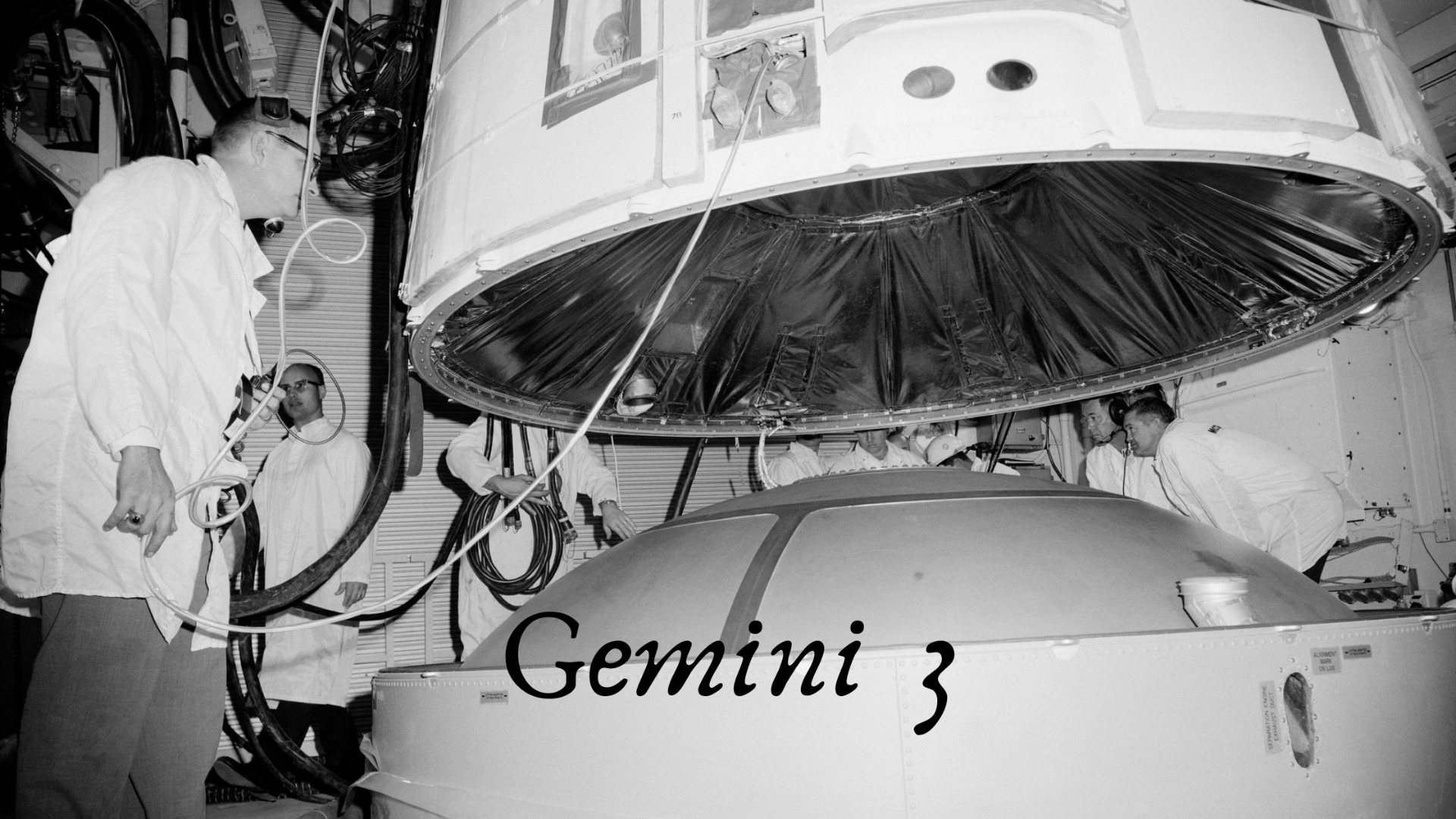 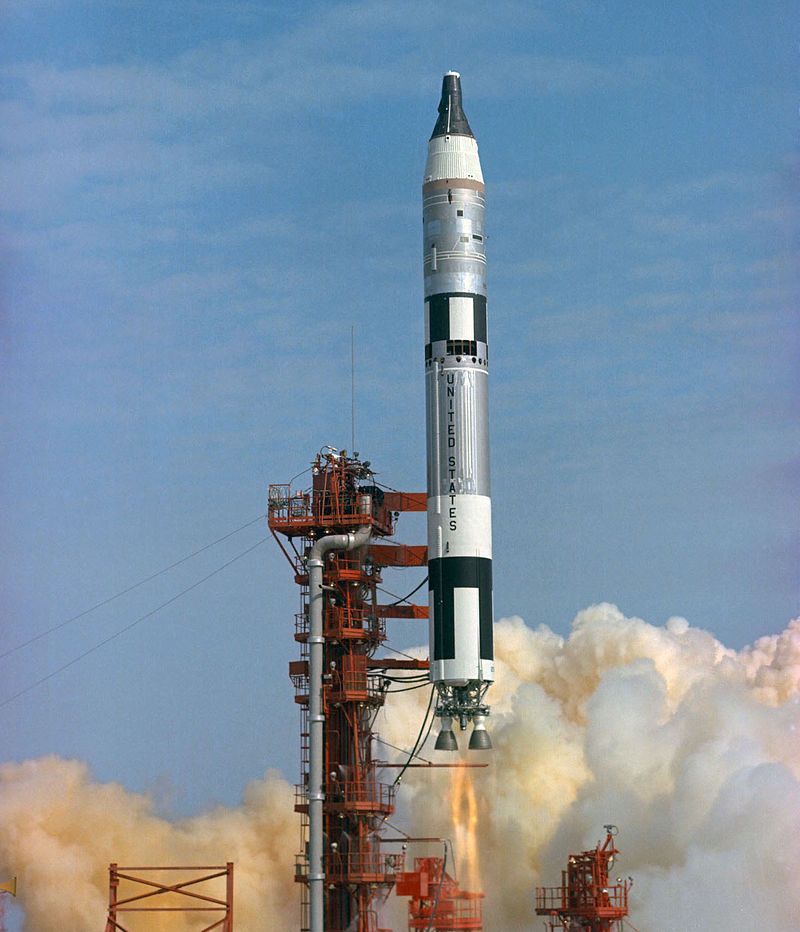 Gemini 3 was the first crewed mission as part of NASA's Gemini program. Astronauts John Young and Gus Grissom flew three low-Earth orbits on March 23, 1965, in their spacecraft nicknamed Molly Brown. It was the final crewed flight controlled from Cape Kennedy in Florida before mission control functions were moved to Houston, Texas.

Testing the new, maneuverable Gemini spacecraft was the mission's primary goal. The crew had to fire the thrusters to change their orbit's shape, drop to a lower altitude, and shift their orbital plane slightly. Gemini 3 also marked the first time two people flew aboard an American spacecraft and the first crewed reentry in which the spacecraft was able to produce lift to change its touchdown point. The Soviet Union had launched a three-person crew on Voskhod 1 one year prior and a two-person crew just a few days earlier with Voskhod 2. 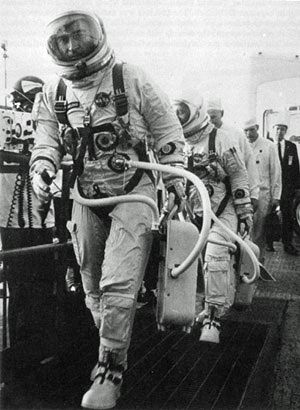 Hoping to avoid what happened when the Mercury flight Liberty Bell 7 capsule sank after splashdown, Gus Grissom named the Gemini 3 spacecraft Molly Brown in reference to The Unsinkable Molly Brown, the Broadway musical. NASA did not like the name and asked him to change it, and Grissom responded, what about the Titanic? NASA then relented and allowed Grissom to keep Molly Brown, but that was the last Gemini flight they allowed the astronauts to name.

During the orbital phase, the only major incident that occurred involved a corned beef sandwich that had been smuggled on board by Young, who had it in the pocket of his spacesuit. However, Deke Slayton, the Director of Flight Crew Operations, wrote in his autobiography that he gave Young permission to have it. Grissom found it incredibly amusing, and Young's deadpan offer for a bite of the sandwich is one of the highlights of their flight. The astronauts each took a few bites of the sandwich before they restowed it. This was such a big deal because the crumbs released could have destroyed some of the spacecraft's electronics. The crewmen were strictly reprimanded when they returned to Earth, and other crews were warned not to pull the same type of stunt.

Two small failures occurred in-flight. The first was when a lever broke that was part of an experiment that tested the effects of zero gravity on sea urchin eggs. The second failure was when the camera was only partially successful because of an improper lens setting. The crew did notice early in the flight that the craft gradually yawing left. However, the problem was traced to a venting water boiler and caused no problems.

Around 90 minutes into the flight, the astronauts made their first orbit change. The 75-second burn moved them from a 122-by-175-km orbit into an almost circular orbit with a 15 m/s drop in speed. The second burn was made 45 minutes later, which changed the orbital inclination by 0.02 degrees. During the third orbit, the last burn lowered the perigee to 72 km. This was made so that the spacecraft would still have reentered the atmosphere if the retrorockets had failed.

The reentry experience initially matched expectations, and the color and pattern of the plasma sheath that enveloped the capsule even matched those produced for ground simulations. However, it became apparent that Molly Brown was off course and would land 69 km off-target. NASA had performed wind tunnel studies which suggested the spacecraft could maneuver to make up for the discrepancy, but Gemini's actual lift was far less than predicted. Grissom could not adjust the course significantly, and Molly Brown subsequently landed 84 km short of its intended splashdown point.

The off-course landing was not the only unexpected event that occurred during the descent. The spacecraft quickly shifted from a vertical to horizontal attitude after the parachutes were deployed. The change was so unexpected Grissom cracked his acrylic faceplate on the control panel in front of him. After this, all Gemini, Apollo, and Space Shuttle spacesuits used polycarbonate plastic.

The astronauts decided to stay in the spacecraft upon landing, not wanting to open the hatch before the recovery ship arrived. The crew spent a half-hour incredibly uncomfortable in the Molly Brown, and due to smoke from the thrusters, the astronauts decided to keep their helmets on with the faceplates closed for some time after splashdown. USS Intrepid recovered the craft and crew safely, just under 5 hours after launching.