Apollo 12 the First Return to the Moon | The Space Collective 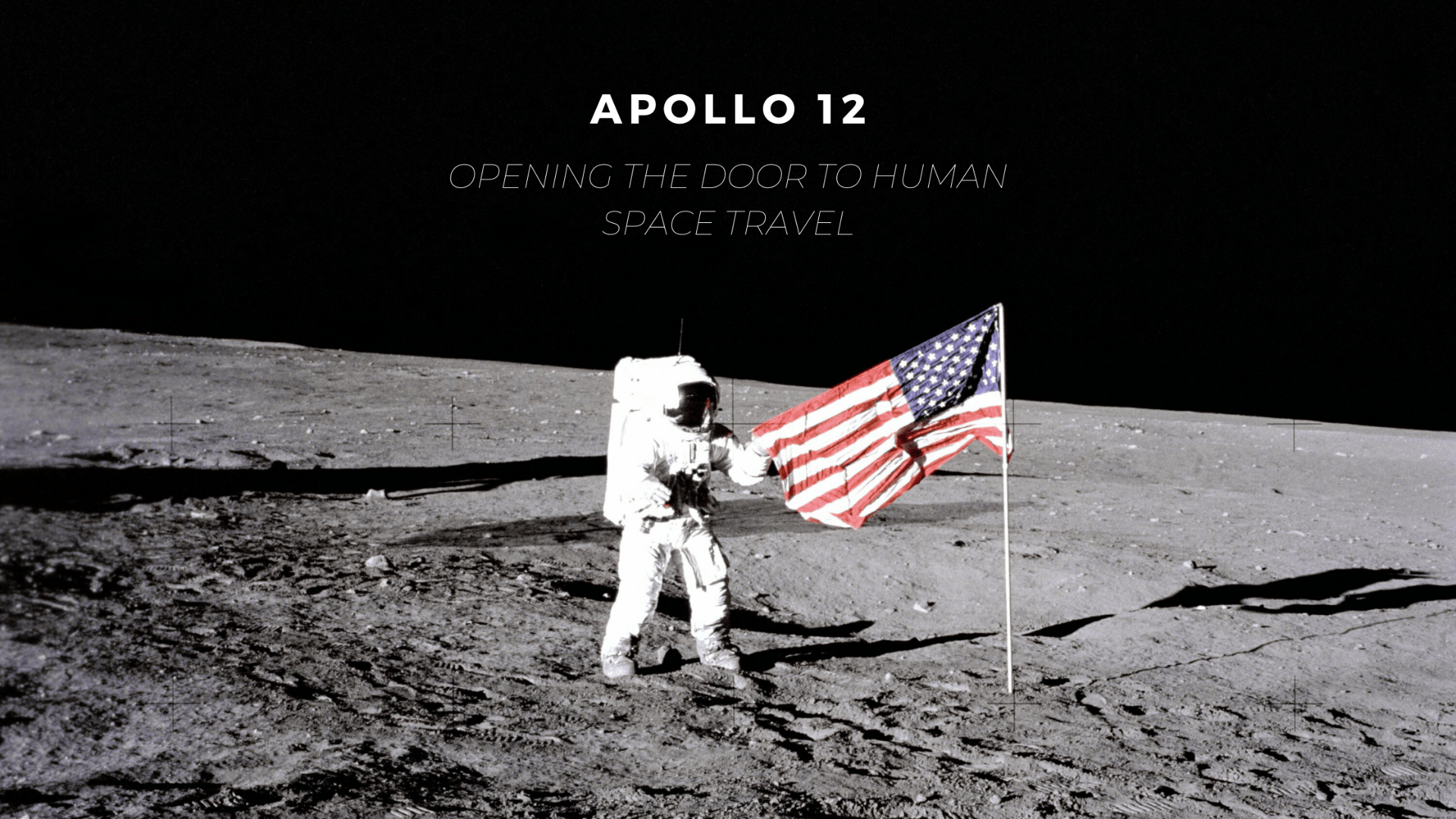 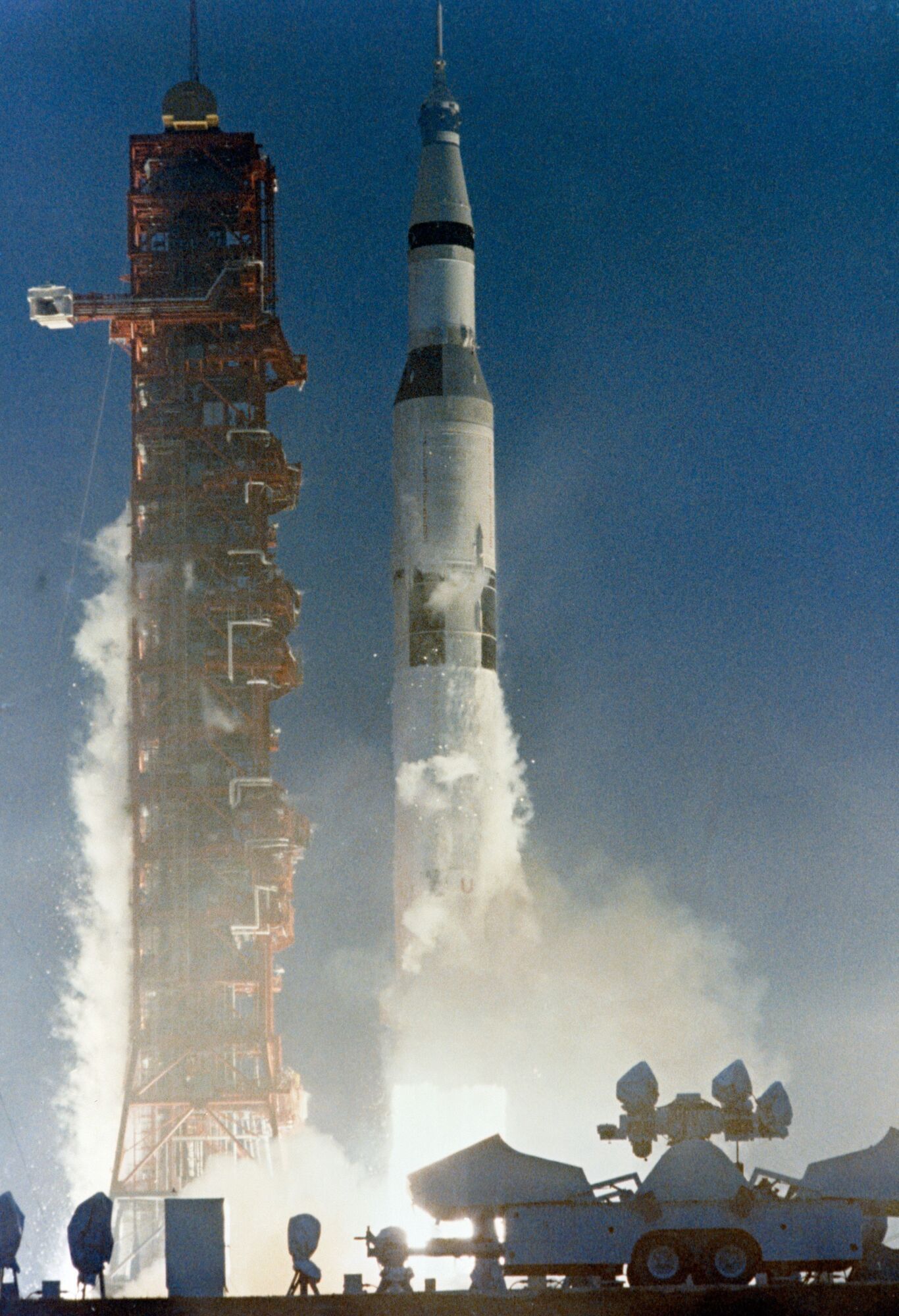 Apollo 12 took a step in closing the gap between Earth and the world beyond us. Represented in their insignia by a clipper ship, the Apollo 12 mission truly embodies what a clipper ship represents to a Navy. Clippers were used to bring the distant world just a fraction closer, and this mission truly did that and more. During the 10 day mission, Apollo 12 proved that human space travel was not a one-off, but was a symbol of what was to come.

Apollo 12 launched from Cape Kennedy, Florida, on November 14, 1969, into a cloudy, rain-swept sky. Launch controllers lost contact at 36 seconds and again at 52 seconds after the Saturn V launch vehicle was struck by lightning. As the booster's first stage continued firing, Apollo 12 launched into an initial Earth-parking orbit. After one-and-a-half revolutions, a check of the electrical circuits took place, and no significant problems were found. The third stage of the vehicle re-ignited for the second burn of five minutes, 45 seconds, putting Apollo 12 into a trajectory toward the Moon. 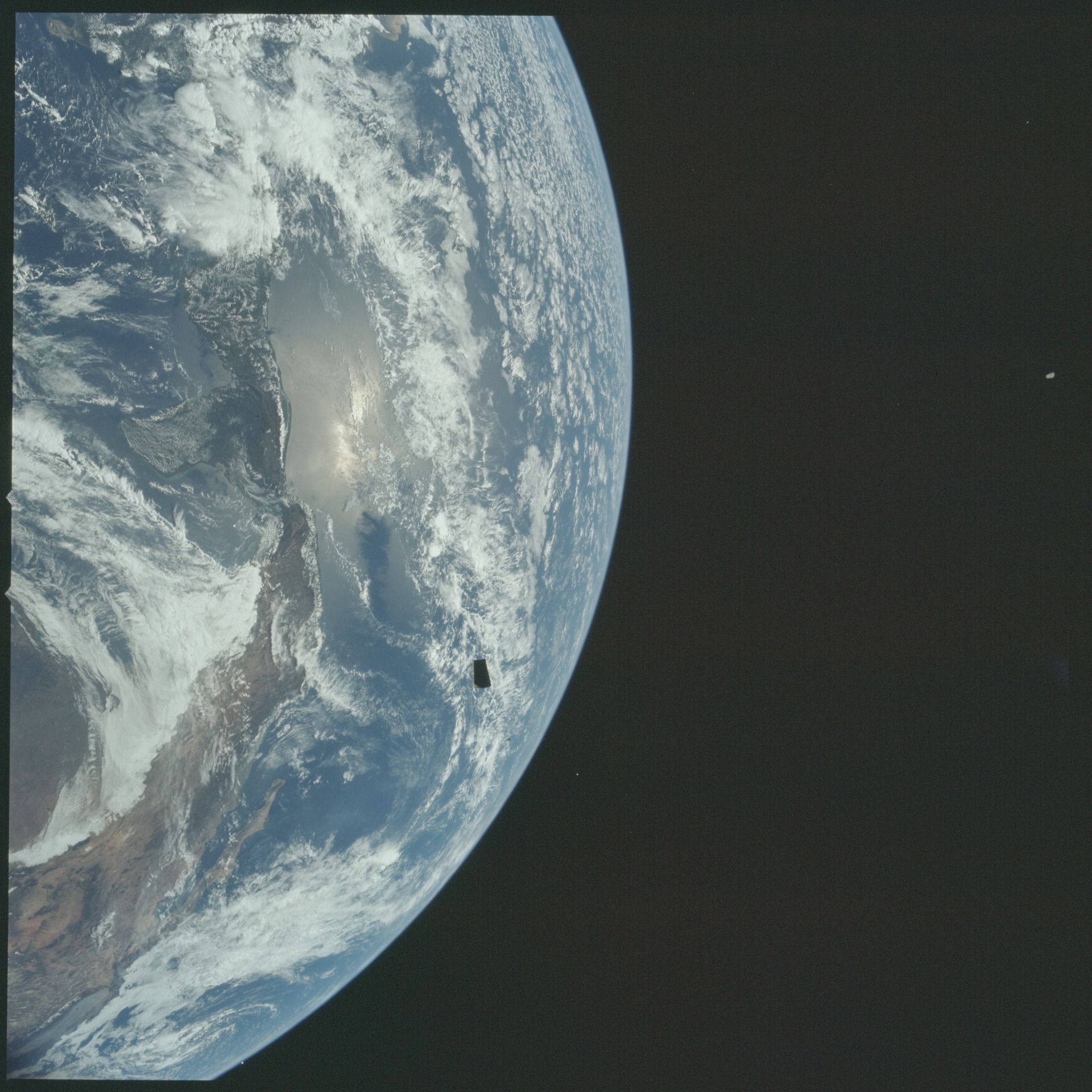 After the Lunar Module separation, the S-IVB was intended to fly into solar orbit. After the S-IVB propulsion system fired, the remaining propellants vented to slow it down to fly past the Moon's trailing edge, which is where the Apollo spacecrafts always approached. The Moon's gravity was then supposed to slingshot the stage into solar orbit. However, an error in the guidance system caused the S-IVB to fly past the Moon with an altitude too high to achieve Earth escape velocity. S-IVB remained in a semi-stable Earth orbit after passing the Moon on November 18, 1969. It finally escaped Earth orbit in 1971 but was briefly recaptured in Earth orbit 31 years later.

On November 15, Apollo 12's trajectory changed to prepare for later insertion into a non-free-return lunar orbit, which was the first "hybrid" trajectory in Apollo flights. The spacecraft slowed to arrive with the most desirable solar illumination.

On November 17, the first lunar orbit insertion burn began when Apollo 12 went behind the Moon at about 97 miles up. The spacecraft entered into an elliptical orbit after the burn, which lasted for about six minutes.

On November 18, two orbits later and again on the Moon's far side, a second lunar orbit insertion burn altered Apollo 12's orbit. The calculation eventually circularized for the orbit of the solo Command and Service Module because of lunar-gravity potential. This calculation facilitated the rendezvous and docking of Intrepid and the Yankee Clipper in their moon-parking orbit after the scheduled lunar landing. Conrad and Bean, on the same day, entered the Lunar Module, and a telecast to Earth occurred, showing the separation of the Command and Service Module and Lunar Module which occurred 107 hours and 54 minutes into the flight.

On November 19, with the Lunar Module behind the Moon in the 14th orbit, the descent orbit insertion maneuver began. The Lunar Module descent engine, or LMDE, fired for 29 seconds, lowering Intrepid's orbit. After the Lunar Module emerged from behind the moon and telemetry contact was re-established with Earth. Due to normal mission anomalies, it was initially believed the Lunar Module was in an incorrect descent trajectory for landing in the desired region. However, using a newly developed "Lear" powered-flight data processor, Houston fed by voice the actual trajectory data and correction maneuver information to the Lunar Module crew. "Lear" enabled them to update the automatic downrange navigation computer program, permitting precision touchdown at the intended site. About 110 hours and 32 minutes into the mission, a precision landing occurred. Conrad controlled the descent semi-manually for the last 500 feet, causing them to land closer to the target than expected. Intrepid landed in the Ocean of Storms, about 535 feet northwest from where Surveyor III stood in its crater, and about 120 feet northeast of Head Crater. Richard Gordon — orbiting 69 miles up in the Yankee Clipper, before the first extravehicular activity (EVA) began and three hours after the landing — saw both the Intrepid and Surveyor through a 28-power sextant telescope.

115 hours and 10 minutes into the mission, Conrad opened Intrepid's hatch to start the first lunar EVA for the Apollo 12 crew. In Apollo 12's first lunar exploration, Conrad spent three hours and 39 minutes outside Intrepid, and Bean logged two hours and 58 minutes on the lunar surface. Conrad collected lunar surface samples and deployed solar wind experiment and the S-band communication antenna during this first EVA. Bean was tasked with mounting the TV camera onto a tripod. It was inadvertently pointed into the sun during this process and ceased to function. Conrad and Bean also took photographs of themselves, the experiment equipment, the spacecraft, and the lunar surface. Before entering the Intrepid, Bean took a 16-inch-deep core sample of the lunar surface and went back into Conrad's Lunar Module. The first EVA ended at 119 hours and five minutes into the mission. The crew then recharged their backpacks, ate, prepared for the second EVA the following day, and slept for about five hours.

On November 20, an hour and a half earlier than planned, the crew began the second EVA. Conrad left the Intrepid 131 hours and 28 minutes into the mission. The second EVA included collecting 70 pounds of rock and dirt samples, probing two areas to retrieve lunar material, and retrieving 10 to 15 pounds of randomly selected samples. The crew then also retrieved the TV camera and moved it back into the Lunar Module in preparation for the return to Earth. A 5,200-foot traverse of the lunar surface occurred during this time, which is perhaps the most important part of this second EVA. Conrad and Bean performed a rock survey while going south from the Intrepid. They went around the rim of Head Crater, to Bench Crater, around Sharp Crater, moved toward Halo Crater. After, they entered the 650-foot-wide Surveyor Crater to retrieve parts of Surveyor III, perched around 150 feet from the southern quadrant's edge.

During the exploration, the astronauts discussed their findings by voice communication with geologists in Houston, who provided advice about which samples to retrieve. They took extensive photographs of the Surveyor before recovering the parts. The 17-pound TV camera on the Surveyor was severed from its mount so that comprehensive studies on Earth could be performed on its gears, motors, optics, metals, and lubricants. The findings from these studies would help determine the long-term effects of exposure to the elements. The motorized scoop from the Surveyor, as well as aluminum tubing, pieces of TV cable, and glass, were collected. The cable was of particular interest to scientists because biological organisms had been previously trapped within the cable, and scientists wanted to know if any had survived.

Gathering surface samples as they went, Conrad and Bean then walked back to Intrepid. They returned to the spacecraft 134 hours and 49 minutes into the mission. Bean re-entered the Lunar Module at about 135 hours and 10 minutes, and Conrad followed at 135 hours and 22 minutes. The second EVA lasted three hours and 48 minutes. The crew then removed and jettisoned their pressurized suits before eating a meal.

Following transfer to the Command Service Module, the ascent stage was jettisoned to impact the Moon after deorbiting. Future landing sites on the lunar surface were heavily photographed from the Command Service Module. While Conrad and Bean were on the lunar surface, Gordon conducted a multi-spectral photographic survey of the Moon's surface. Apollo 12 was then sent into a trans-Earth trajectory at 172 hours and 27 minutes into the mission on November 21.

The return flight was uneventful. A midcourse correction maneuver occurred November 22, when Apollo 12 was about 208,000 miles from Earth. On November 23, when the spacecraft was 108,000 miles from Earth, the crew held a televised news conference, followed by sleep. Following the same re-entry procedure for Apollo 11, on November 24, Apollo 12 splashed down in the Pacific Ocean, ending its 10-day flight. Splashdown occurred about 400 miles southeast of American Samoa and was close to three miles from the target area. It was also three miles south of and within sight of USS Hornet's recovery ship. The flight was a total of 244 hours, 36 minutes, 25 seconds — just 62 seconds longer than planned. Apollo 12 mission proved that traveling to, and landing on, the Moon was not a fluke or a miracle. It was an event that could and would be repeated. Apollo 12 was another step in closing the gap between us and the stars.