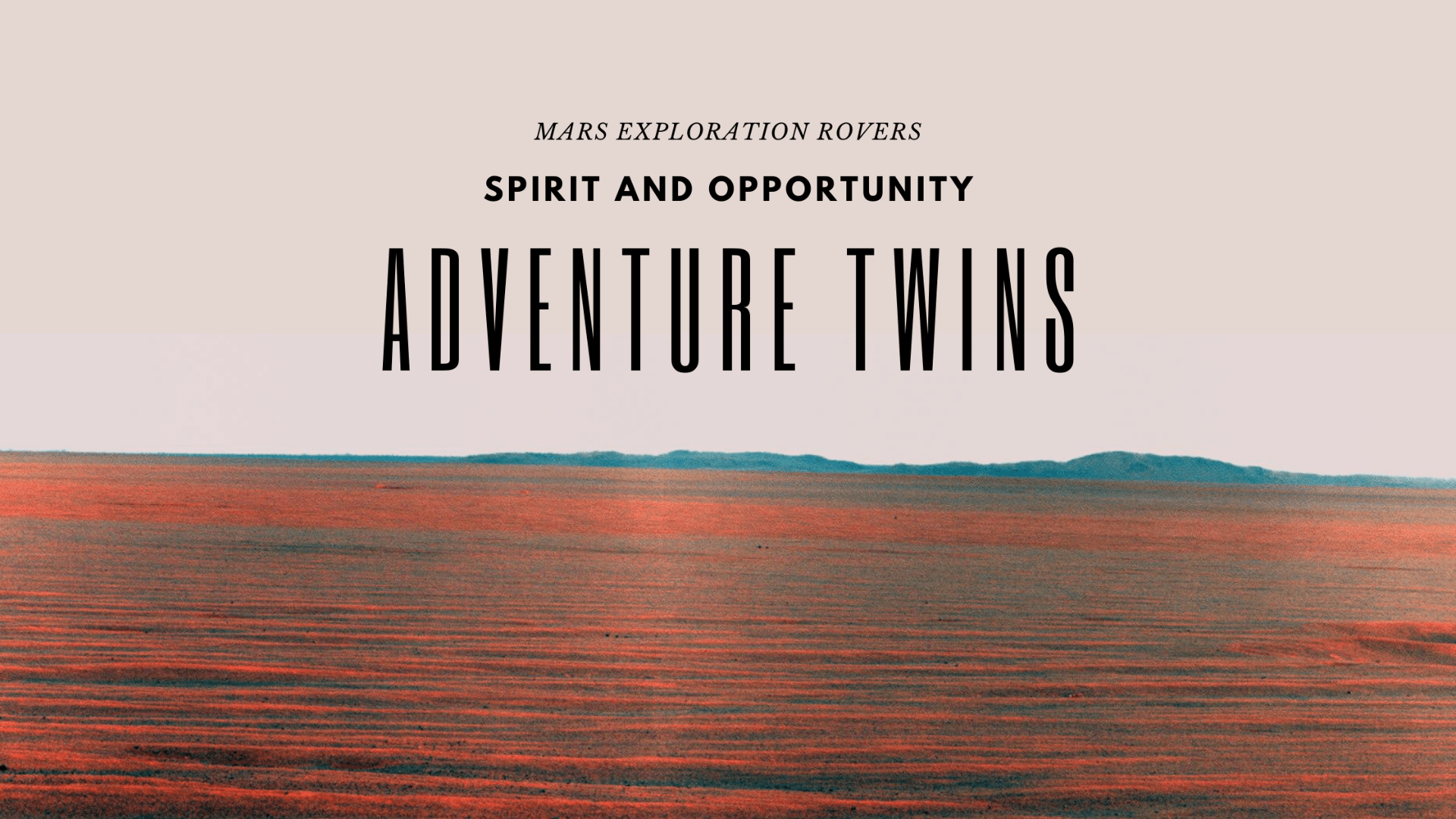 THE ADVENTURE TWINS: SPIRIT AND OPPORTUNITY

NASA's Mars Exploration Rover Opportunity stole the hearts of the internet in February of 2019 when NASA announced they had lost communication with the rover, affectionately nicknamed Oppy. It was built to operate for just 90 days but kept going for 15 years, long after its twin Spirit. Oppy's last message to scientists before it went dark in June of 2018 captured the hearts of many. The rover sent data bursts, not words, but scientists at NASA have poetically translated the last message they received from Opportunity to, "My battery is low, and it's getting dark." 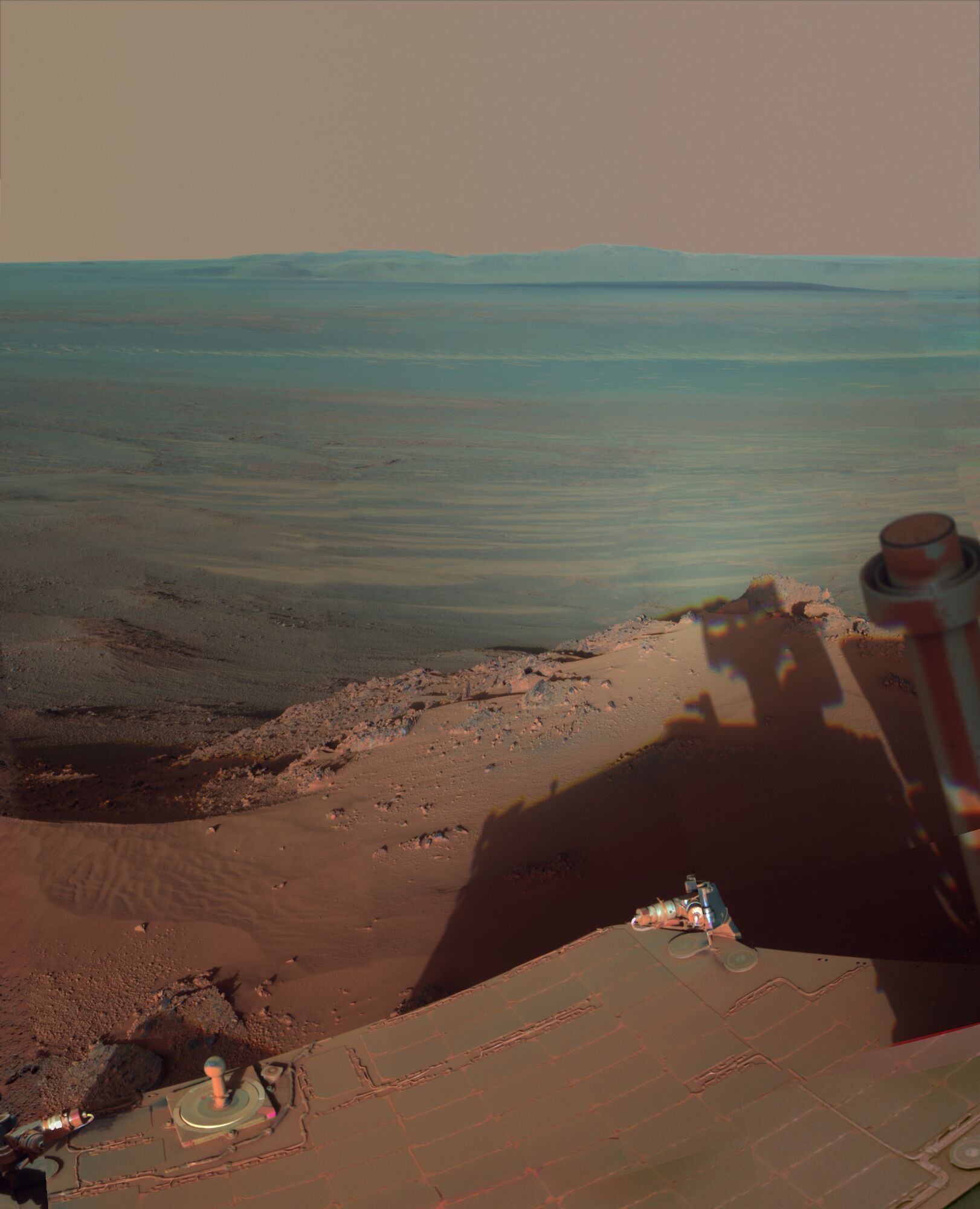 Spirit and Opportunity were launched in June and July of 2003, making their way to Mars by January of 2004, where they both successfully landed on the surface. Their purpose was to explore Mars and search for signs of past life, both rovers outlasting their planned 90-day mission. Among their myriad discoveries, Spirit found evidence that Mars was once much wetter than it is today, which helped scientists better understand the Martian wind. Opportunity made many discoveries about Mars, including evidence that at least one section of Mars was wet for a period and that conditions could have been suitable for sustaining microbial life!

Both Spirit and Opportunity struggled on the Martian surface, eventually leading to their demise. In May 2009, Spirit became stuck with only five working wheels in soft soil at "Troy." After months of testing and meticulously planned maneuvers, NASA ended their efforts, putting an end to Spirit's mission on May 25, 2011. Opportunity and Spirit were solar-powered rovers. Opportunity was fittingly exploring Mars' Perseverance Valley when a storm was so intense that it darkened the sky for months hit, and contact was lost, preventing sunlight from reaching the solar panels on Opportunity. When the sky finally cleared after months of darkness, Opportunity remained silent. The internal clock is possibly so scrambled that Oppy no longer knew when to sleep or wake up to receive commands. Flight controllers attempted numerous times to make contact in vain before they sent one final series of recovery commands in early February. NASA tried to "wake up" Oppy daily with different songs. NASA published their "Opportunity, Wake Up!" playlist on Spotify. They tried songs like "Here Comes the Sun" by The Beatles, "Wake Me Up Before You Go-Go" by Wham!, "Telephone Line" by Electric Light Orchestra, "Lie On Mars?" by David Bowie, "I Won't Back Down" by Tom Petty, and "I Will Survive" by Gloria Gaynor. They sent Billie Holiday's "I'll Be Seeing You" as one final wake-up song. However, there was no response from space, only silence.

As sad as losing Spirit and Opportunity is, the data we received from them has a life of its own. After landing in a crater, Opportunity found the mineral hematite, which typically forms in water, solidifying the theory that there was at one point water on Mars. At an area called Comanche, Spirit found rocks that are ten times richer in iron carbonates and magnesium than any other Martian rock previously studied. Spirit churned up soil while dragging a wheel and found 90 percent pure silica at "Home Plate," which on Earth, this kind of silica usually exists in hot springs or hot steam vents. Opportunity found veins of gypsum that were bright-colored in the rocks near the rim of Endeavor Crater, which likely formed when water flowed through underground fractures in the rocks, leaving calcium behind. We wouldn't have this knowledge if it weren't for Spirit and Opportunity, and it will help prepare us for future Mars missions.