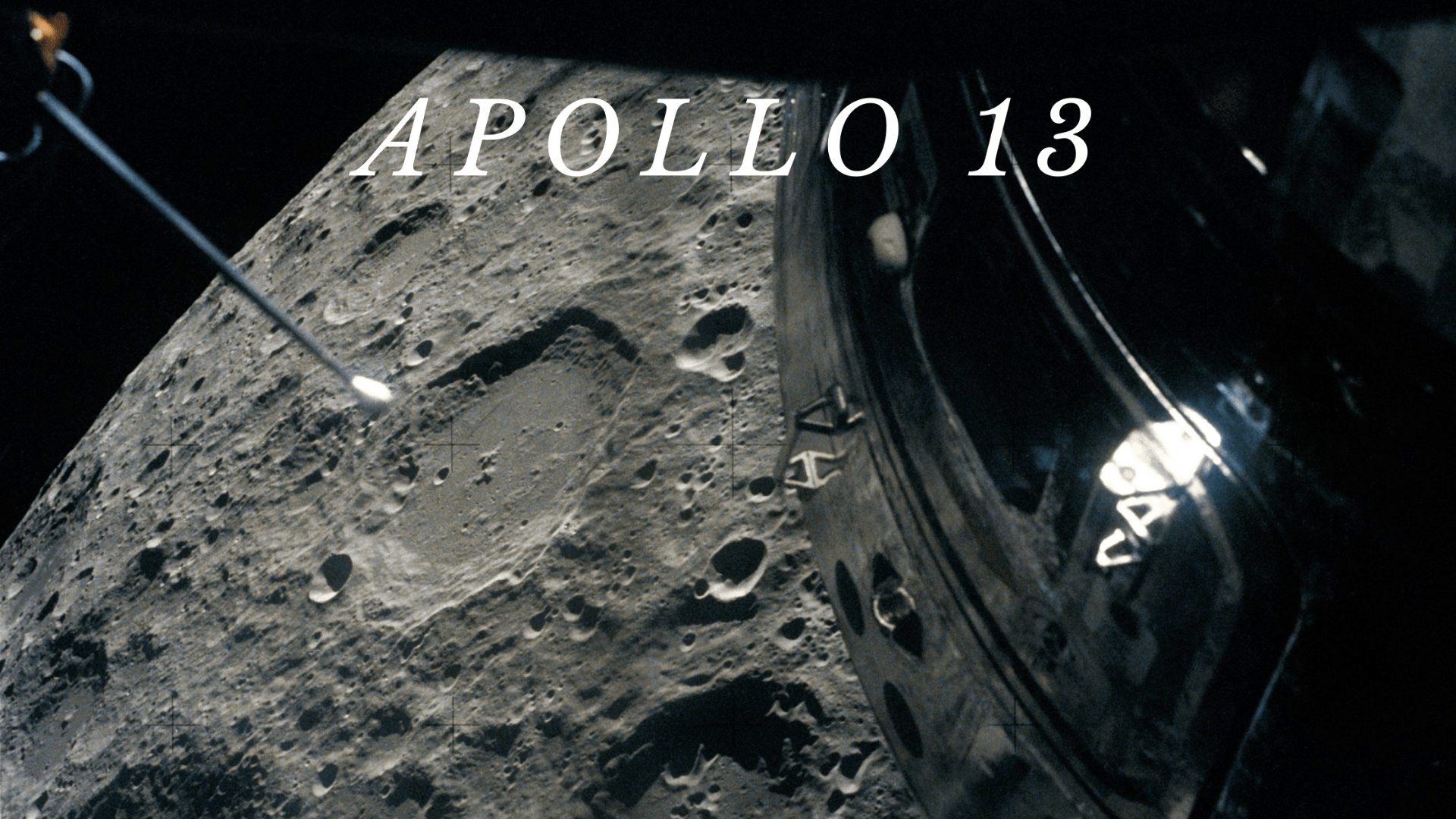 Apollo 13 was the nearly disastrous seventh crewed Apollo mission that launched on April 11, 1970. It was meant to be the third Moon landing, but an abort occurred after an oxygen tank failure in the service module (SM) occurred two days into the mission. The mission was lead by Jim Lovell with Fred Haise as Apollo Lunar Module (LM) pilot and Jack Swigert as command module (CM) pilot. Swigert was a replacement for Ken Mattingly, who was unable to participate after being exposed to rubella.

Apollo 13 was about 210,000 mi (330,000 km) from Earth when problems arose. Haise completed a shutdown of the LM after testing its systems, while Lovell stowed the TV camera after their broadcast. Jack Lousma, the CAPCOM, sent instructions on changing the spacecraft's position when one of the SM's oxygen tank's pressure sensor appeared to be malfunctioning. The astronauts were instructed to activate the stirring fans in the tanks. Usually, this was done once daily; a stir would destratify the tanks' contents and give a more accurate pressure reading. Swigert activated the switches controlling the fans, and after a few seconds, turned them off again. 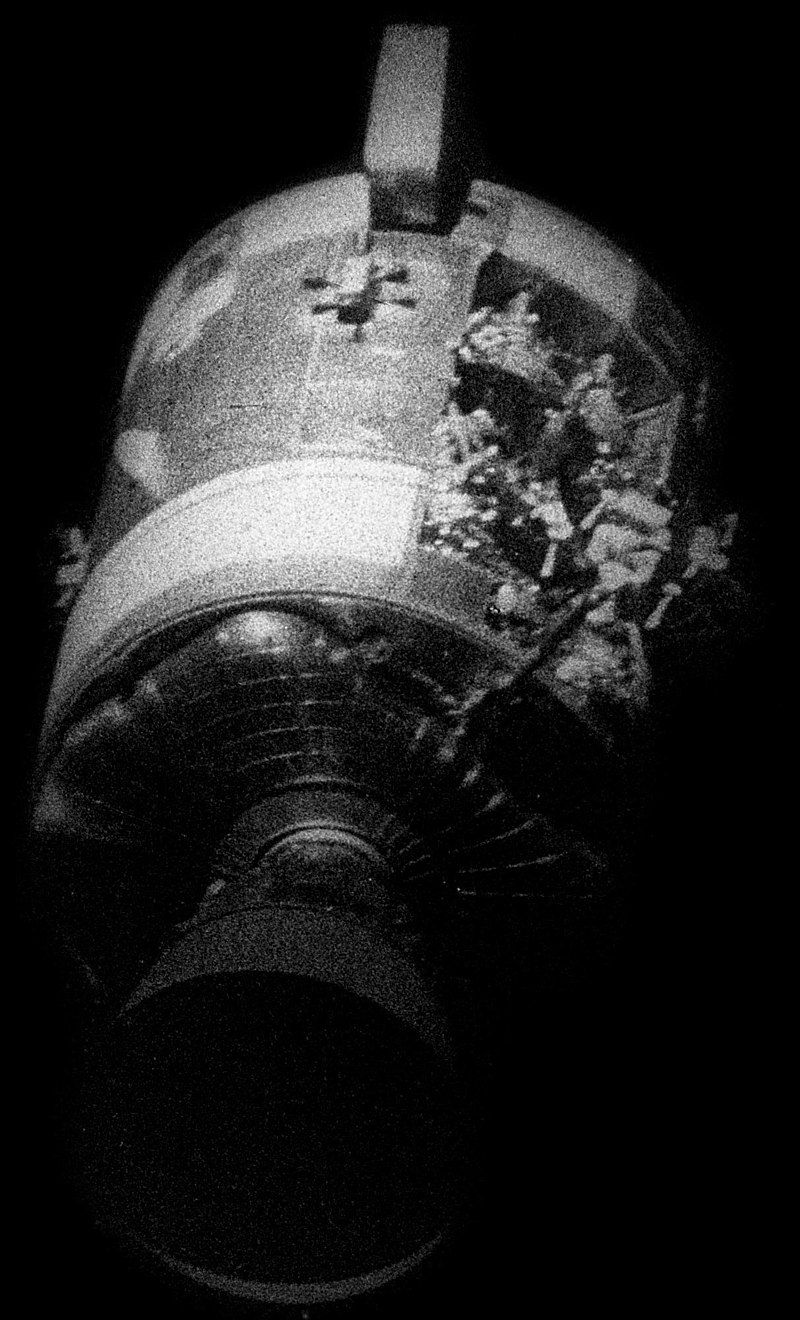 Ninety-five seconds after Swigert activated the switches, the Apollo 13 crew heard a large bang followed by fluctuations in electrical power and the attitude control thrusters firing. Telemetry and communications to Earth were lost until the system automatically corrected 2 seconds later when the narrow-beam to wide-beam mode on the high-gain S-band antenna used for translunar communications was switched.

Lovell initially thought when hearing the noise that the LM's cabin-repressurization valve had been activated by Haise, who often did this to startle his crewmates. However, Haise had no idea what happened, and Lovell realized the problem was serious. There were initially concerns that a meteoroid might have struck the LM, but they quickly realized there was no leak, and Lovell thought there was a "Main Bus B undervolt." This meant that the voltage produced by the SM's three fuel cells was insufficient. This was a problem considering nearly everything in the CSM requires power. Haise then checked the fuel cell's status and found that two of them were dead. Mission rules stated they could not enter lunar orbit unless all fuel cells were operational.

Several unusual readings in the minutes after the accident showed that tank 2 was empty and tank 1's pressure slowly falling, and the high-gain antenna was not working. Ground control missed the warning signs from tank 2 following the stir, as they were focused on tank 1 and believed that its reading would be a guide to what was present in tank 2. Lovell then reported seeing something that looked like a gas leaking out into space when he looked out the window, making it abundantly clear that there was a serious problem. The mission's goal then became getting the astronauts back to Earth alive. 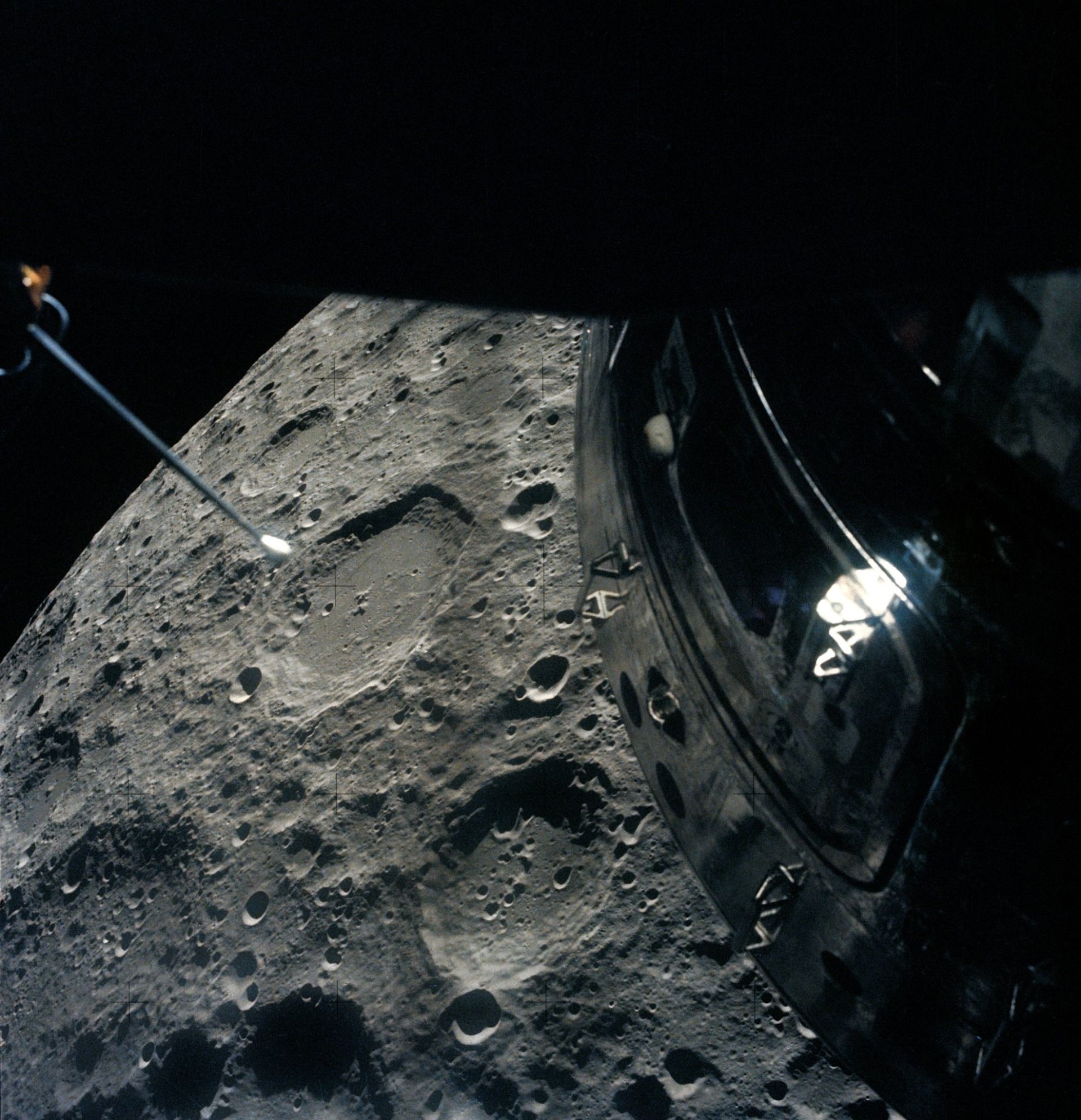 After assessing the variables, the astronauts were directed by ground control to power up the LM and use it as a lifeboat. This was because the lunar module had charged batteries and full oxygen tanks for use on the lunar surface. If the Apollo 13 accident occurred on the return voyage, the astronauts would have died after the LM had already been jettisoned. The accident occurring when it did was the only scenario that led to their survival.

A critical decision that had to be made was the choice of the return path. A "direct abort" would require the use of the SM's main engine, the SPS, to return before reaching the Moon. However, the accident could have damaged the SPS and the fuel cells. To meet its power requirements, it would have to last at least another hour. Ground control then decided on a longer route instead, during which the spacecraft would swing around the Moon before heading back to Earth.

The flight plan change would get Apollo 13 back to Earth in about four days with splashdown in the Indian Ocean. Ground control was anxious to shorten the travel time and move splashdown to the Pacific Ocean, where most of their recovery forces were located. One option suggested that would cut the return time down 36 hours, but it required jettisoning the SM. Jettisoning the SM would expose the CM's heat shield to space during the return journey, which it had not been designed.

The electricity for the CSM came from fuel cells that produced water, but the LM was powered by silver-zinc batteries, which did not. This meant that both electrical power and water would be critical, as it was needed for equipment cooling and drinking. LM power consumption was taken to the lowest level possible, and Swigert filled some drinking bags with water from the CM's water tap. Haise calculated they would run out of water about five hours before re-entry, even after assuming rationing of personal consumption. This seemed acceptable to ground control because the Apollo 11's LM systems continued to operate for seven to eight hours once jettisoned in lunar orbit. 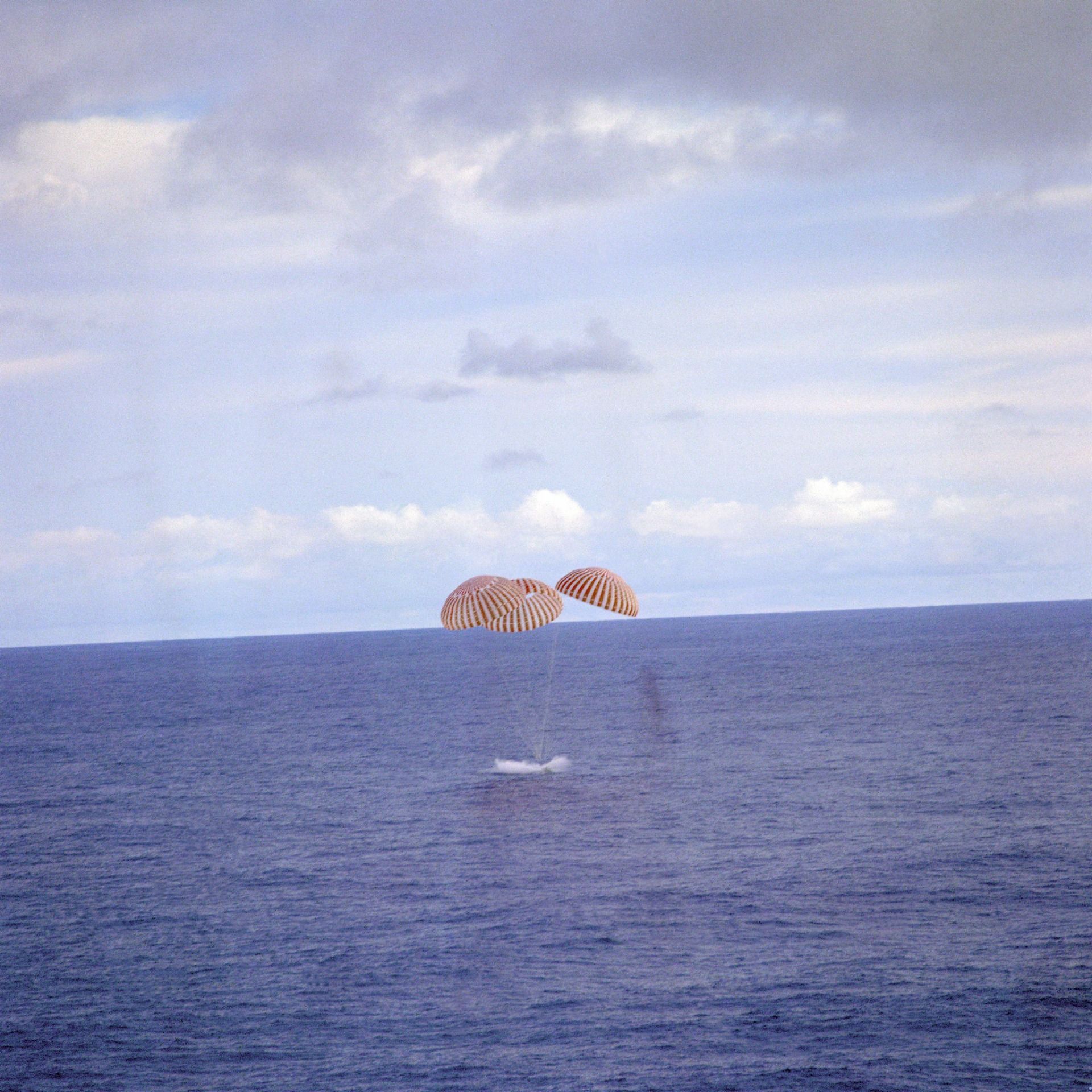 Inside the darkened spacecraft, the temperature dropped as low as 3 °C (38 °F) on their return. Lovell thought about having the crew put on their spacesuits. However, they decided against it, as they thought it would be too hot. Instead, Swigert put on an extra coverall, and Lovell and Haise wore their lunar EVA boots. Although all three astronauts were cold, Swigert was especially cold because he had gotten his feet wet while filling the water bags and had no lunar overshoes. After the SM was jettisoned, the crew saw and photographed the damage for the first time. They reported an entire panel missing from the SM's exterior, the high-gain antenna was damaged, the fuel cells above the oxygen tank shelf were tilted, and a significant amount of debris.

The last problem that needed to be solved was how to separate the lunar module from the command module just before re-entry and ensure it was far enough away. The standard procedure in lunar orbit was to release the LM and then use the service module's RCS to pull the CSM away. However, the SM had already been released. The LM's manufacturer, Grumman, assigned a team of engineers to figure out how much air pressure to use to push the modules apart. A solution was offered and implemented successfully. The LM was destroyed upon re-entry to Earth's atmosphere, with the remaining pieces falling in the deep ocean. 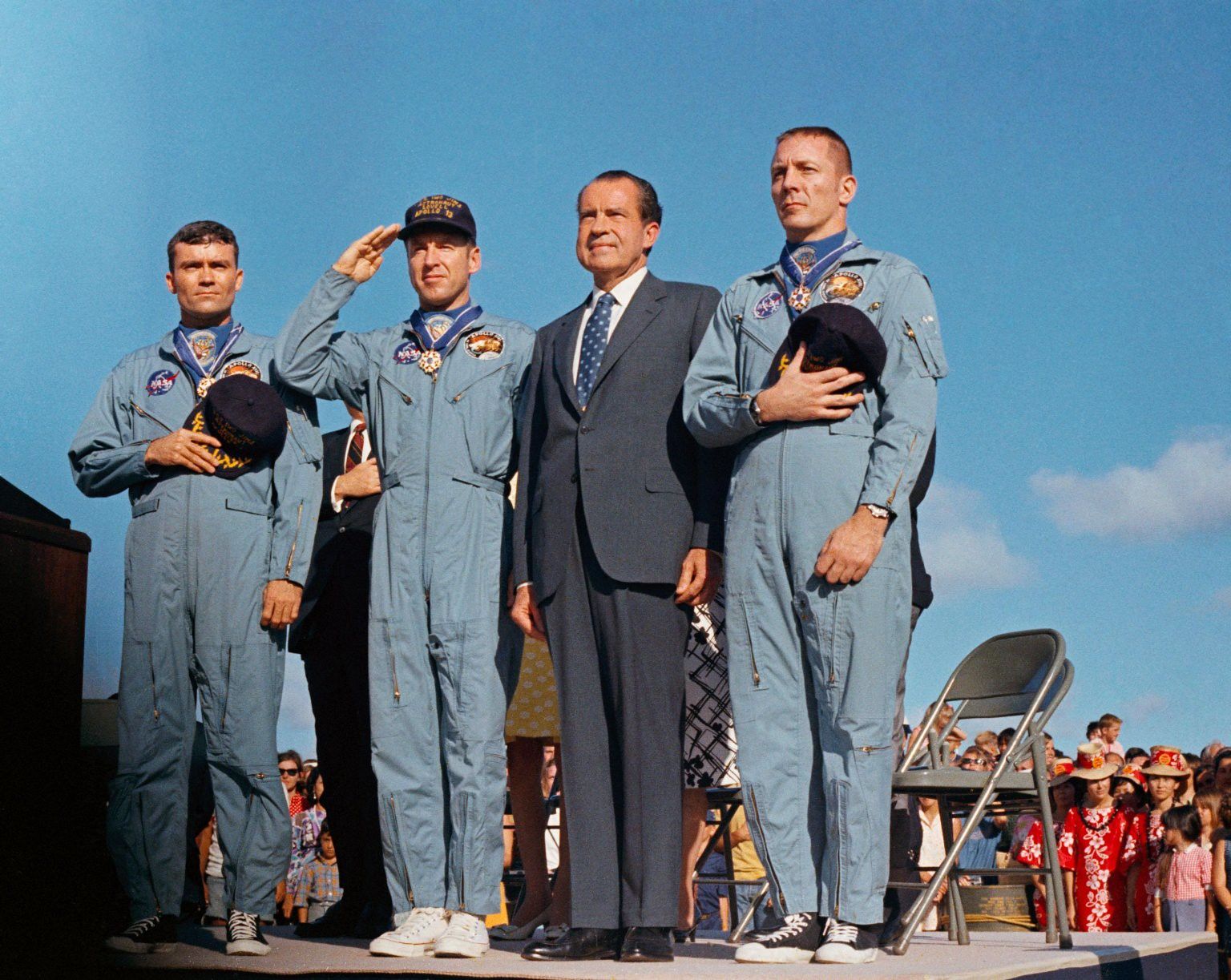 During re-entry, ionization of the air around the command module typically caused a four-minute communications blackout. Because of Apollo 13's shallow re-entry path, the communications blackout was lengthened to six minutes. This was longer than had been expected, and ground controllers feared that the CM's heat shield had failed. However, they regained radio contact and splashed down safely southeast of American Samoa in the South Pacific Ocean, with the recovery ship, the USS Iwo Jima, just 3.5 nmi (6.5 km) away. The crew was fatigued, but all were in good condition except for Haise, who was suffering from a severe urinary tract infection because of insufficient water intake. The crew stayed overnight on the ship before flying to American Samoa, then to Hawaii. In Hawaii, they met President Richard Nixon, who awarded them the Presidential Medal of Freedom, the highest civilian honor. They stayed overnight, and they were flown back to Houston.