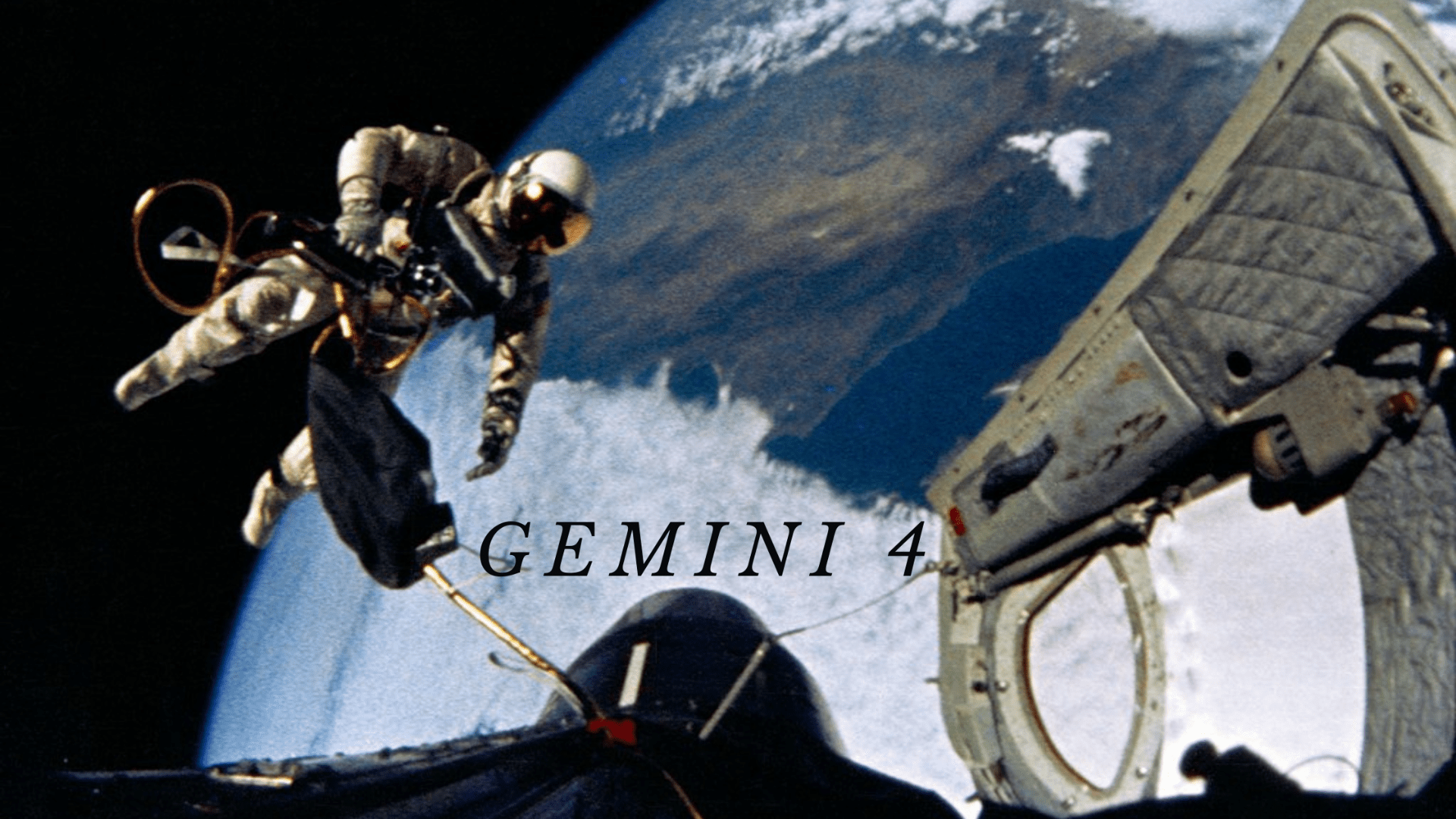 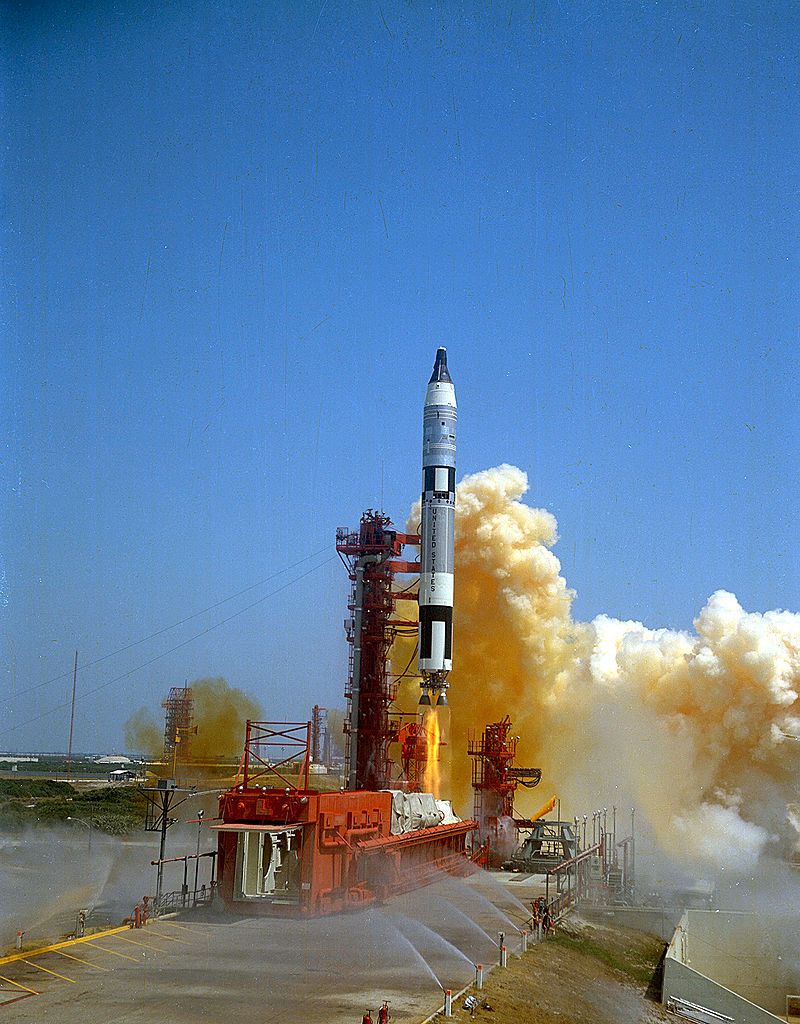 Gemini IV was the second crewed spaceflight in the Gemini Project. Astronauts Ed White and James McDivitt orbited Earth 66 times over four days, the first flight for the US to approach the Soviet Vostok 5's five-day flight. The mission's highlight was the first American spacewalk completed by Ed White when he free-floated outside the spacecraft while tethered for 20 minutes.

The Gemini IV flight also included the first attempt at a space rendezvous when McDivitt attempted to maneuver close to the Titan II upper stage, but this was unsuccessful. It was the first American flight to perform various scientific experiments in space. Gemini IV was also the first multi-day space flight by the United States, designed to show that humans could remain in space for extended lengths of time.

Gemini IV was launched from Cape Kennedy Air Force Station on June 3, 1965. The broadcast of the launch was itself historic because an audience from several European countries were able to watch the launch on live television via the Early Bird satellite for the first time. Due to the satellite broadcast and a new control center in Houston, press interest was so impressive that NASA had to accommodate 1,100 journalists.

During lift-off, two roll transients caused by misalignment of the Titan first stage engines occurred; the autopilot quickly corrected these. A slight oscillation in the pitch and yaw planes resulted from this. The performance of all launch vehicle systems was nearly nominal.

McDivitt's rendezvous attempt with the spent Titan II upper stage on the first orbit. This was unsuccessful for several reasons. NASA engineers had not yet figured out the peculiarities involved in the space rendezvous. Thrusting toward the target changed the spacecraft's velocity and orbital altitude relative to the target. When McDivitt attempted the rendezvous, he moved away and downward as the retrograde thrust lowered his orbit, increasing his speed. Additionally, the stage was dumping its residual fuel, causing it to move around in various directions relative to the Gemini. There were also only two running lights on the Titan II stage, making it hard for McDivitt to determine its orientation. He concluded that future targets should have at least three lights. Furthermore, there was no radar onboard Gemini IV to give a precise range to the target, meaning the astronauts had to rely on their visual depth perception to estimate the range, and this differed for the two astronauts.

McDivitt finally gave up on the rendezvous to concentrate on the more important EVA objective after expending almost half his thruster fuel. The astronauts postponed the EVA from the second orbit until the third because McDivitt decided that White looked tired and hot following the stress of the launch and the failed rendezvous. Flying over Australia, the astronauts began to depressurize the cabin, and over Hawaii, they pulled the handle to open the hatch, but the latches failed to move.

Fortunately, McDivitt could identify the problem because the hatch had failed to close in the vacuum chamber test on the ground. After that failure, McDivitt worked with a technician and was able to see how the mechanism worked and that the cause was a spring that failed to compress. In-flight, he was able to help White get it open and thought he could get it to latch again.

There were communication problems during the spacewalk. Gemini spacecrafts were the first to use a voice-operated switch (VOX) on the astronaut's microphones. However, McDivitt soon realized his VOX circuit was not working correctly as he could not hear the Capsule Communicator (CAPCOM) in the VOX setting, only in push-to-talk. Plus, while outside the spacecraft, White could not receive transmissions from the ground and had all messages relayed through McDivitt.

White floated out of the spacecraft while tied to a tether, using a Hand-Held Maneuvering Unit (HHMU) which expelled pressurized oxygen to provide thrust for controlling his travel. He went 4.6 meters out and began to experiment with maneuvering himself. McDivitt took photographs while White maneuvered around the spacecraft. White exhausted the HHMU gas sooner than he would have liked, as he was enjoying the experience. White was running up against two factors that constrained the time for his EVA: crossing the solar terminator and the loss of signal from the Bermuda tracking station. The flight controllers were frustrated with their inability to communicate with White and remind him of the time constraint. They didn't want the first American EVA to be performed out of communication with Earth or in darkness.

White tried to bargain for more time by saying they needed to take more pictures but was denied, and McDivitt had to coax him in. White finally came back into the Gemini IV spacecraft after nearly 20 minutes. The spacecraft had entered the darkness by the time he got in. The hatch was equally as stubborn in relatching as it was opening. If the hatch had not been closed properly, it would have resulted in the deaths of both astronauts during re-entry. However, McDivitt was able to fix the mechanism again, and White was able to close it. The mission initially called for opening the hatch once more to throw out White's EVA equipment. However, McDivitt elected not to risk it, and he decided to keep the unnecessary equipment on board for the rest of the flight.

They powered down the maneuvering system, intending to drift for the next two-and-a-half days to conserve the remaining fuel. White's spacewalk was the highlight of the mission, and McDivitt's photographs were published worldwide after the flight. The photos showed White wearing an Omega 'Speedmaster' chronograph watch on his spacesuit sleeve, one of two makes that NASA approved for space use following extensive tests. Omega was unaware of these tests or that their watch would be used in space until after they saw the photos. The watch model worn during the spacewalk is now known as the "Ed White" by watch collectors.

Gemini IV re-entered Earth's atmosphere during the 62nd orbit using an open-loop rolling re-entry because of a computer failure. They began rolling the spacecraft at 120 km to increase its stability, and by 12,000 m, the roll had stopped. The drogue parachute deployed shortly after, and the main deployed at 3,200 m. The landing was rougher than expected because of a malfunctioning thruster that caused the roll to be much faster than planned. However, neither of the crew encountered any problems contrary to NASA doctors' concerns about their landing upright after four days in space. Even though they landed 80 km short of the intended landing target, some ships had already started steaming to the splashdown point, and a helicopter was able to see them land. They were recovered by the USS Wasp.